Metal polishing processes have adapted and improved throughout the years. Let’s look at polishing techniques and equipment throughout history.

When you think of Roman soldiers, you think of strong, shiny armor. Many Roman artifacts found in museums, such as silverware and armor, were carefully polished centuries ago.

Theories suggest that before and during the Roman Empire, metal objects were carefully buffed by rubbing wood ashes on the surface. This technique produced a finish that was scratch-less and shiny for the time. 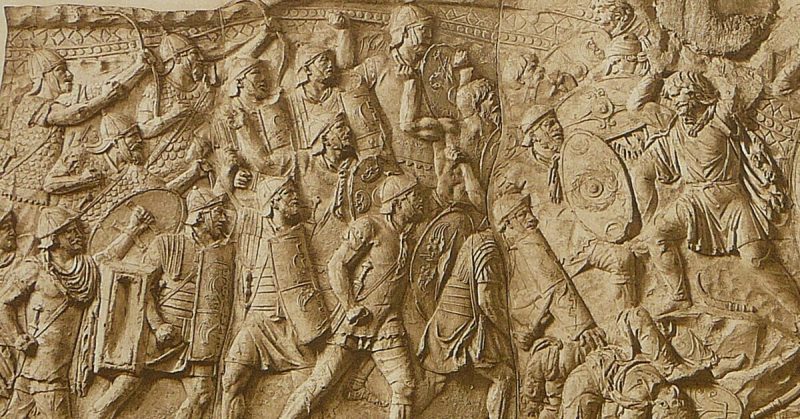 After the Roman Empire, metalwork equipment and techniques evolved. Instead of using ashes, the polishing wheel became popularized.

This is depiction of a hand-crank grinder can be found in the Luttrell Psalter, a famous medieval manuscript. This manpowered wheel was used for early metal grinding and buffing. 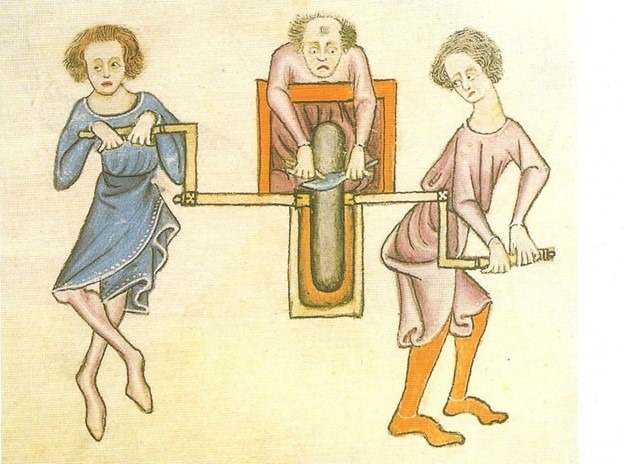 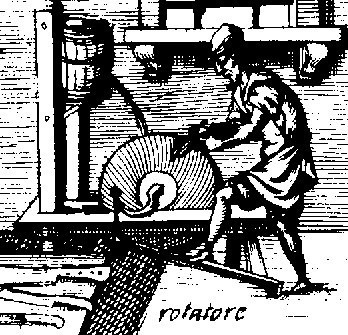 Image from Grinding Wheels for the Great Machine

The below artwork depicts a 1571 metal polisher. He is polishing armor with a large, water-powered grinding wheel. In the back window, you can see the waterwheel that powers the grinder.

More images from this time give historic insight to other hand tools and techniques used for buffing. 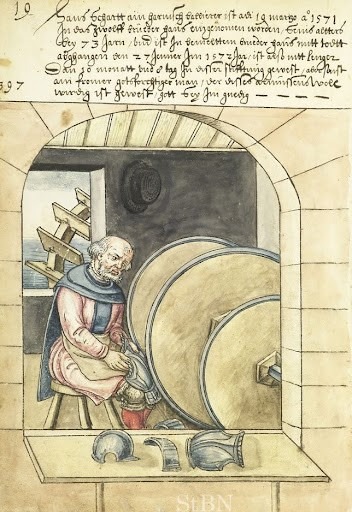 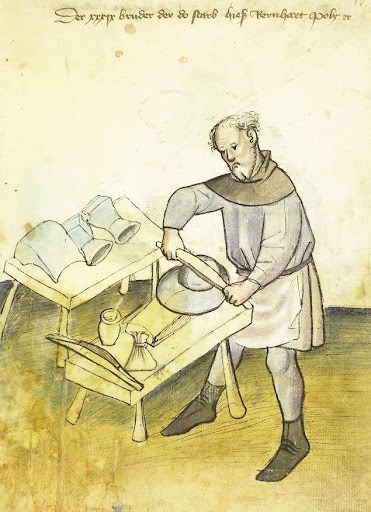 Below is another example of a water-powered grinder used to polish armor. This particular shop is directly above the water, generating power just below the floorboards. Note how large the polishing wheels are compared to today. 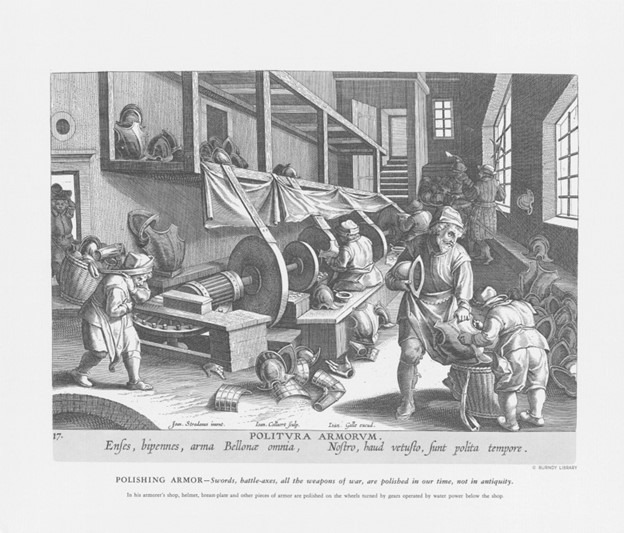 Image from Grinding Wheels for the Great Machine

Now we jump ahead to 1885. In this shop, metal objects are polished “using wooden wheels, covered with emery, that make 2000 revolutions in a minute.” Notice how the polishing wheels are smaller than previous equipment. This more closely reflects the modern polishing facility.

Also, in 1870, Benjamin Chew Tilghman invented the sandblasting process. This process creates a consistent surface finish by shooting sand or other blast media at a high velocity. 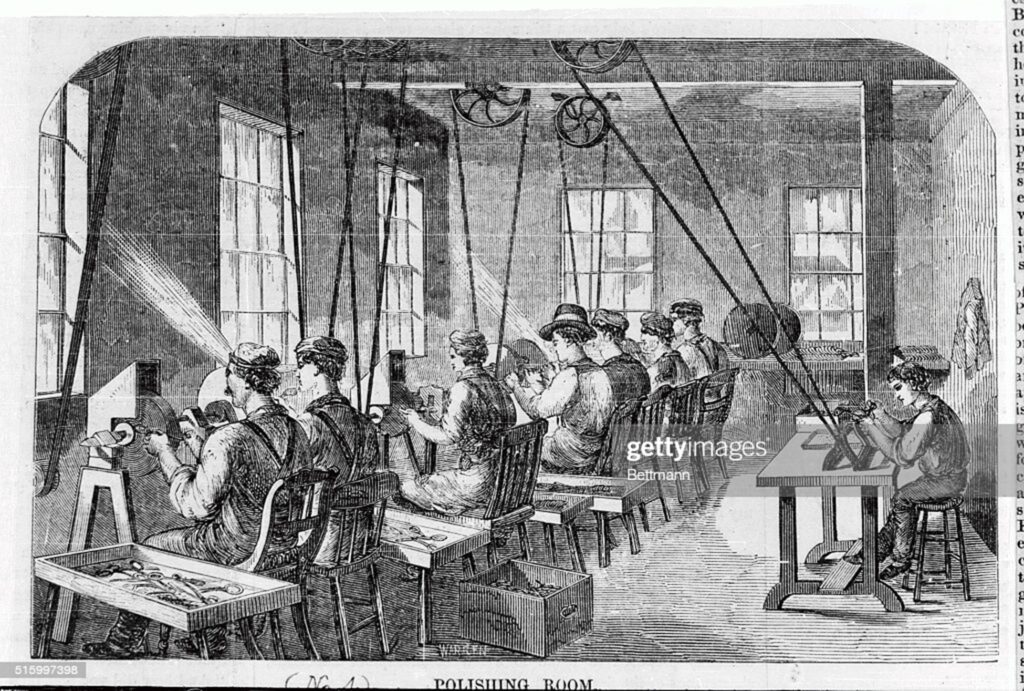 Image and quote from Getty Images

In the early 1900’s, you could find metal polishers laying on their stomachs with the wheel below them. These 20th century knife grinders were called “yellow bellies.” Notice how dogs lay on the workers’ legs to keep them warm.

Later, workers transitioned to grinding in a vertical posture for increased comfort. 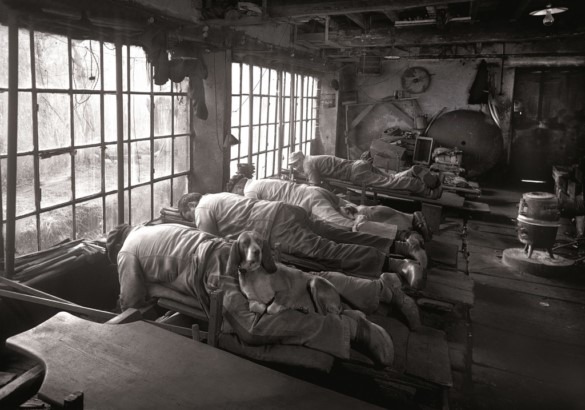 In the early 1900’s, we get a glimpse of interchangeable wheel grits for better polishing. The newspaper clippings describe the equipment as modern and improved. A major improvement during this time is in worker health and safety. An early textbook describes these adaptations saying…

The “hood protects the worker from dust and, in case the wheel bursts, from flying particles. But where these methods are not possible, it is necessary to use a special form of ventilation that draws the dust away from the point at which it is generated. Special hoods connected with exhaust pipes are thus placed over grinding wheels, over rotary saw-blades, over polishing wheels, and so on (Fig. 53). Even with all the precautions mentioned, there will be dust in many workrooms. In such cases the individual worker should carry an air-filter over his mouth and nose.” 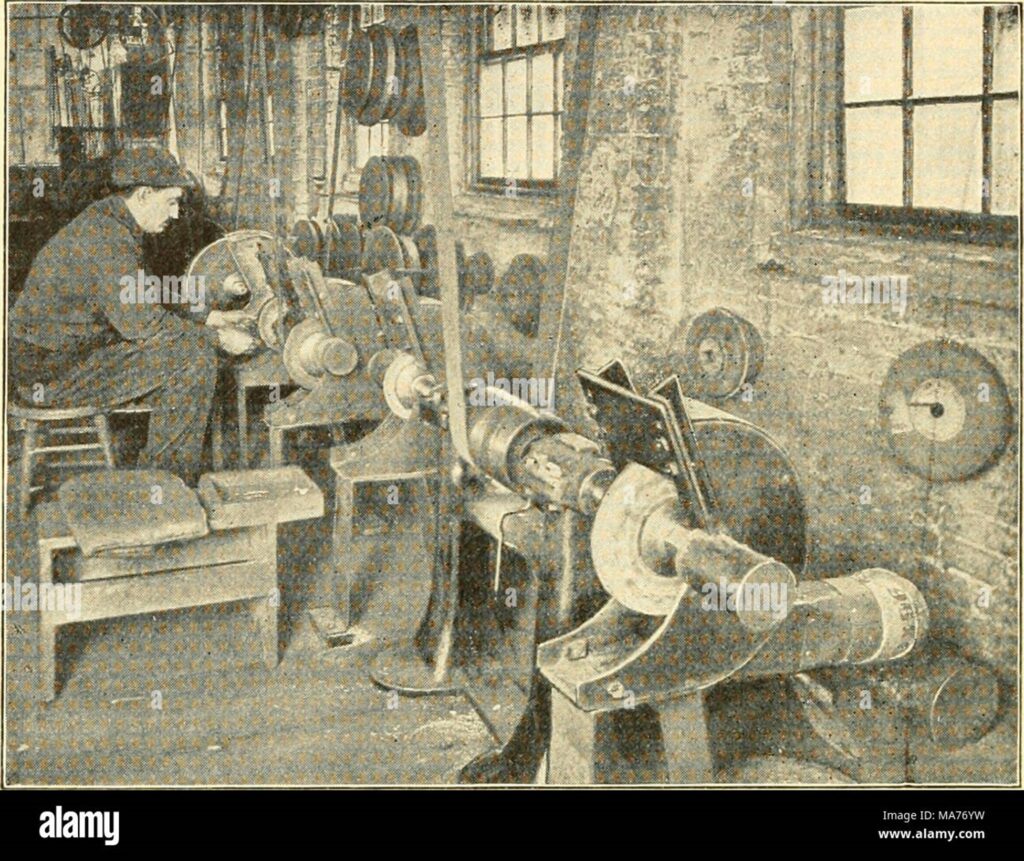 Image and quote from Alamy 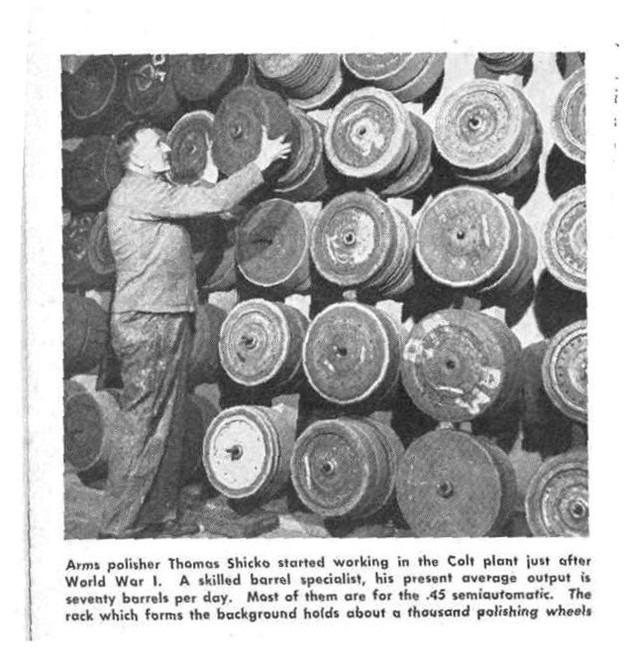 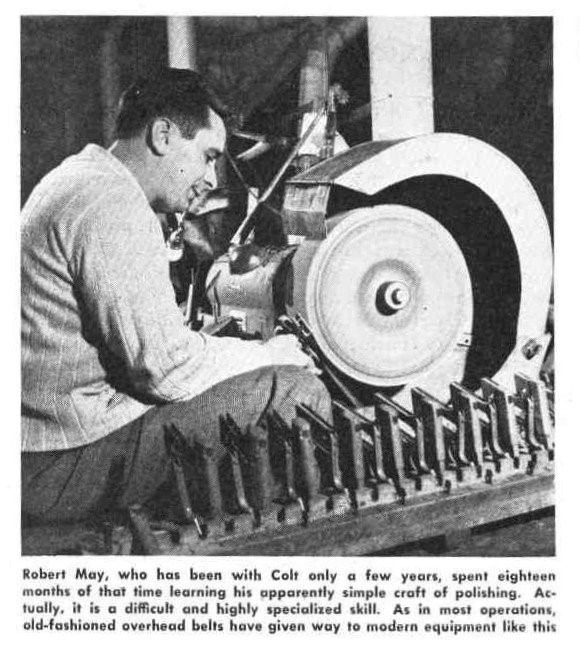 Below is a man buffing rubber doll bodies in 1936. The wheel design and safety hood is similar to metal polishing.

While equipment safety continued to improve during this time, you can see that workers still did not wear protective equipment such as glasses or gloves. 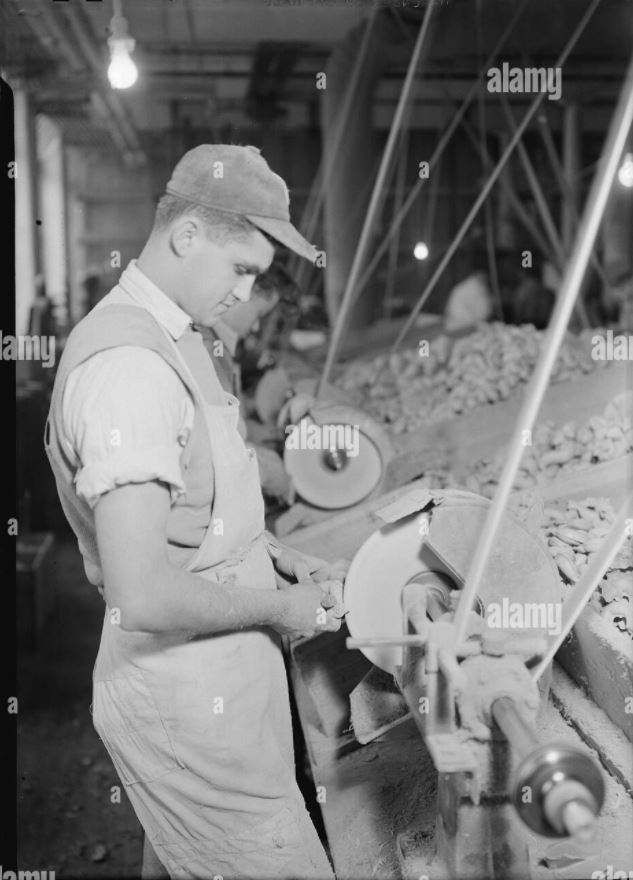 In this image, we see a young, 1942 worker buffing aluminum bomber seat supports. It was also in this decade that Batesville Products began producing, polishing, and plating castings. 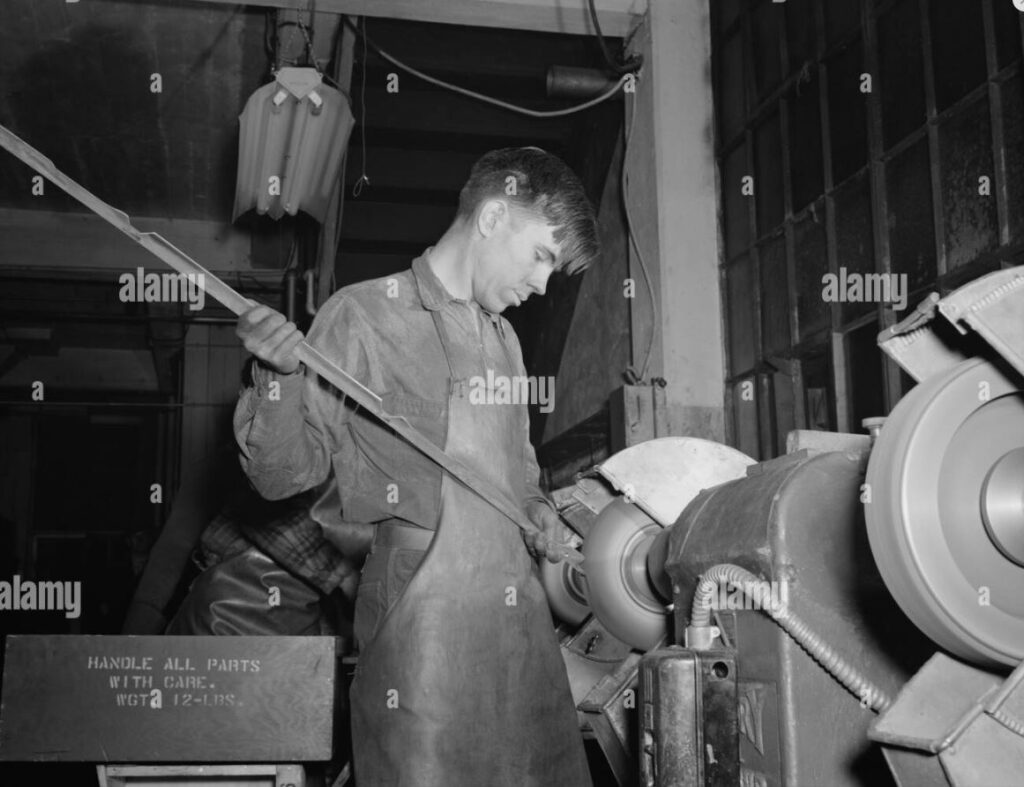 Today, most metal polishing is performed sitting or standing at a wheel with interchangeable grits.

Overall, the process has been improved to increase safety with… 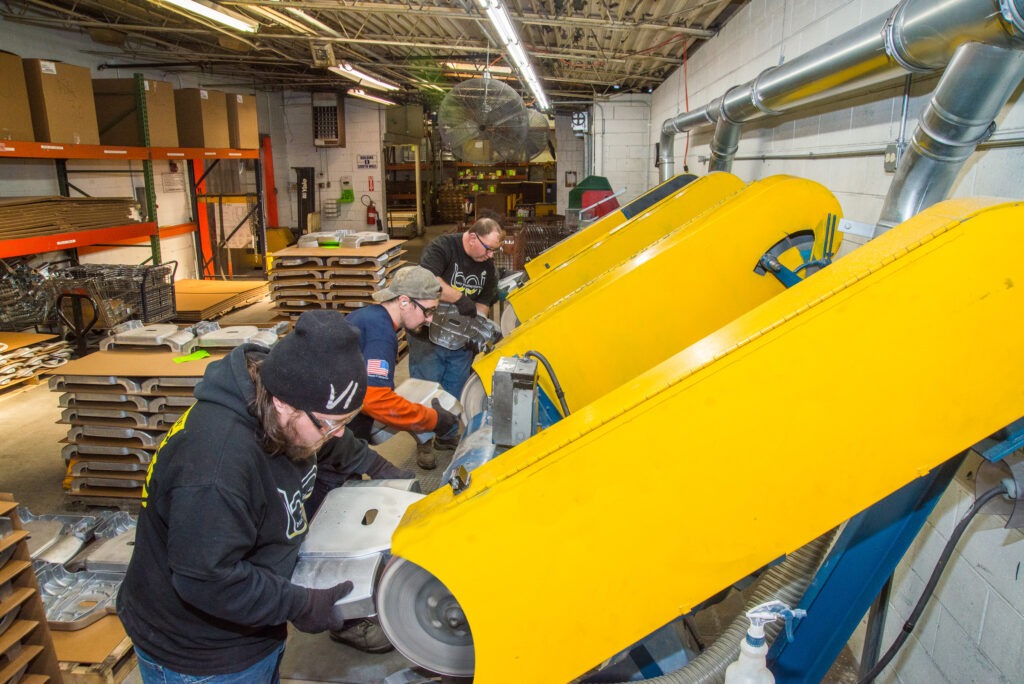 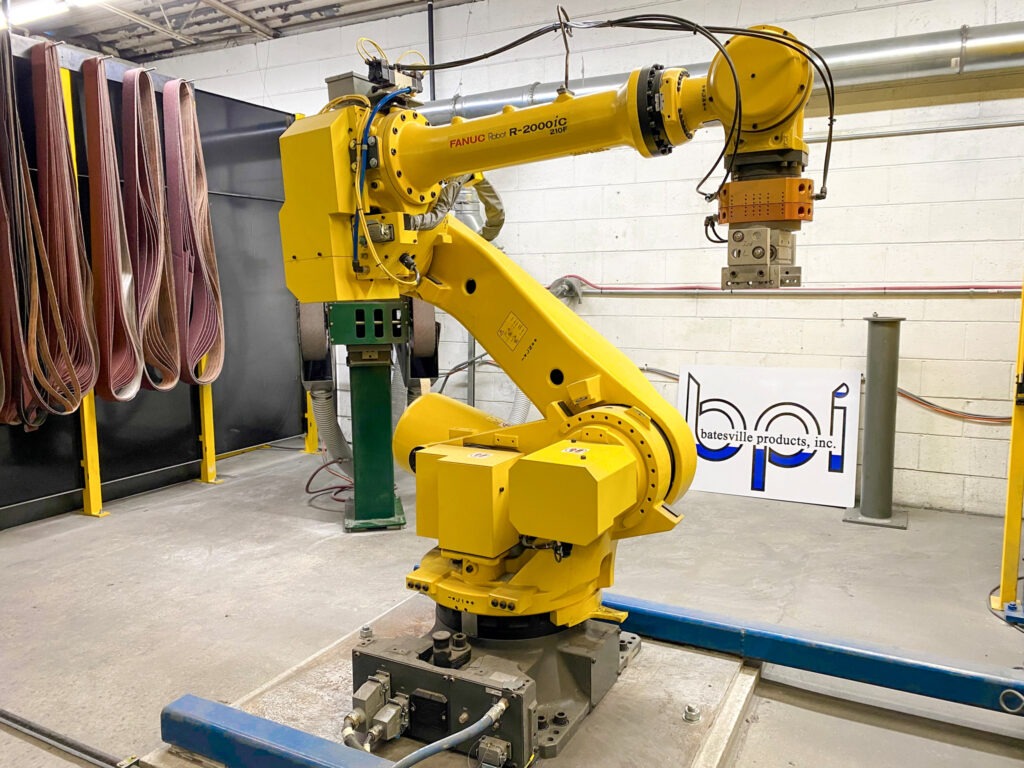 Subscribe to learn more about permanent mold casting, such as our industry webinars and other content that will help you navigate the world of metalcasting.

It never hurts to check

Request a quote and a Batesville team member will be in touch to discuss your metalcasting goals and how our metalcasting experts can help make your next project a success.